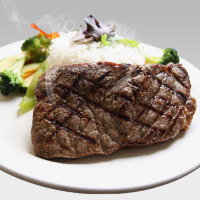 Can you lose weight with a diet that places no restrictions on your fat intake? Those who swear by the Atkins plan and other low-carbohydrate regimes have long insisted you can – and new research backs them up, reports The New York Times. In a study funded by the National Institutes of Health, a racially diverse group of 148 obese men and women were given diets to follow. Half were put on low-fat regimes, which limited their total fat intake to less than 30 percent of their daily calories, while the other half followed low-carb diets that involved eating mostly protein and fat. Neither group was given calorie limits.

Over the course of a year, those on the low-carb diet lost around 8 pounds more than the low-fat group, shed more body fat, and showed greater improvements in cholesterol levels and other measures of cardiovascular health. Those on the low-fat diet did lose weight, but most of it was muscle, not fat.

“This is one for the first long-term trials that’s given these diets without calorie restrictions,” says Darush Mozaffarian, a cardiologist at Tufts University who was not involved in the study. “It show that in a free-living setting, cutting your carbs helps you lose weight without focusing on calories.”