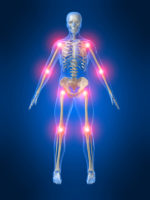 Doctors in medical school learn that inflammation is beneficial – to a degree. “They taught us there that inflammation was, in a sense, a good thing for the body,” Blaylock says. “Redness, swelling, pain, and limited range of motion are important defense mechanisms and play a major role in the healing process.”

But you can get too much of a good thin, he adds. Research shows that while inflammation can be caused by lifestyle factors – including high-sugar diets, lack of exercise, obesity, and other bad habits – it appears to be more common in some people for reasons that are genetic.

Scientists from Stanford University have linked 25 genetic factors to coronary artery disease and found people with this common heart condition are most likely predisposed to the disease because they have gene variants linked to inflammation.

Two physiological processes play a major role in inflammation: the immune system and the prostaglandin (one of a number of hormone-like substances) system.

“They interact with each other and either enhance inflammation or reduce it,” Blaylock says. “Now there is a growing evidence that one or both of these systems stops functioning correctly in many people and gets stuck in the inflammation mode. A process meant to speed recovery in fact goes into overdrive, causing potentially far greater problems.”

The key players that influence this process:

“What you eat – your diet – influences all of these factors, however,” Blaylock points out. “Your diet determines how you feel, and how you recover from illnesses. A poor diet can increase a prolong inflammation while a good diet can cause it to grind to a halt in time, protecting your health.”

It is now widely believed that chronic inflammation that goes undetected for years is the underlying cause of many dreaded illnesses such as type II diabetes, heart disease, stroke, some cancers (e.g. colon cancer), neurological diseases (e.g. Alzheimer’s and dementia), autoimmune diseases (e.g. rheumatoid arthritis), inflammatory bowel diseases (e.g. Crohn’s disease), as well as other diseases which have unknown causes, like allergies, fibromyalgia and migraines.

Emerging science continues to show the need for reducing the amount of inflammation in our bodies to protect against disease. In fact, those not even dealing with the everyday aches and pains associated with growing older should heed this research as a wake up call and control inflammation before it does any damage.

This has led researchers to conclude that controlling inflammation is at least as important as keeping cholesterol levels balanced when it comes to maintaining your heart health. And this new concept is nothing short of revolutionary.

Many people are under the impression that inflammation is something that only happens when you’re injured, or is simply a minor annoyance. This is a major mistake and could be deadly. Therefore, the importance of finding a highly bioavailable form of curcumin is critical.

Please consider including the most highly bioavailable form of curcumin on the market today. Delivered in a liposomal delivery system, our Liposomal Curcumin is 2,000% more effective than ordinary forms of cur cumin.  It has powerful anti-inflammatory effects and is a very strong antioxidant.  Regular curcumin is absorbed at approximately 5-10%, the balance remains in the gastrointestinal tract and is lost.  Liposomalized curcumin is absorbed at substaintially higher rate.

More Doctors And Researchers Speak Out About the Cholesterol Myth A recent conference entitled “Heart Disease in the 21st Century: Beyond the Lipid... continue reading