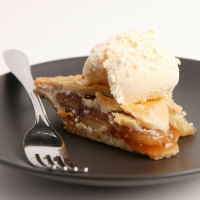 What’s your favorite “comfort food”? You know you have one — a treat you use to soothe bruised feelings following some distressing event.

Well, guess what: You’re kidding yourself. A new study finds comfort foods are no more effective at lifting moods than any other foods — or even sitting quietly without consuming a calorie.

“Negative moods naturally dissipate over time,” writes a University of Minnesota research team led by psychologist Traci Mann. “Individuals may be giving comfort food ‘credit’ for mood effects that would have occurred even in the absence of the comfort food.”

That tub of Haagen-Dazs may not have magical powers after all.

Mann and her colleagues describe four experiments, three of which were similarly structured. At an introductory session, participants were specifically asked “What foods would make you feel better if you were in a bad mood?”, as well as other foods they enjoy but do not place into that category.

Then, during two sessions scheduled at least one week apart, groups of students (100 in total) watched 18-minute videos composed of film clips found to elicit “feelings of anger, fear, anxiety, and/or sadness.” At one session, after filling out a questionnaire designed to determine their mood, they were given a generous portion of their self-described comfort food (chocolate being the most popular, followed by ice cream and cookies).

At the other, they were given either one of the non-comfort foods they enjoyed, such as almonds or cashews (Experiment 1); a granola bar, which served as a neutral food (Experiment 2); or nothing at all, meaning they simply sat in silence for three minutes (Experiment 3). Afterwards, all filled out the mood questionnaire for a second time.

“Participants’ moods improved over time,” the researchers report. However, they add, “this happened to the same extent regardless of which type of food they ate, or whether they at any food at all.”

This finding held true no matter how much they consumed, nor how confident they were that their comfort food would be particularly effective. Belief in such foods’ power is extremely widespread: After listing their favorites, 81 percent of participants either agreed, or strongly agreed, with the statement “I am confident that eating this food would make me feel better.”

These findings have obvious implications for diet and weight loss. “We found no justification for people to choose comfort foods when they are distressed,” the researchers conclude. “Removing an excuse for eating a high-calorie or high-fat food may help people develop and maintain healthier eating habits, and may lead them to focus on other, food-free methods of improving their mood.”

In other words, we’ve just lost yet another rationalization for eating junk. That’s awfully distressing, but it’s good to know the feeling will pass — with or without the help of a Hershey’s bar.