There are two forms of vitamin B12 that you’re likely to come across – methylcobalamin and cyanocobalamin. The latter is much more common in multivitamins and B12 supplements, but there are many strong arguments to replace this ingredient with methylcobalamin, which is slowly gaining popularity and will surely one day dominate the industry. But what is it that makes methylcobalamin a superior health supplement?

The two different B12 forms are very similar, and the only chemical difference between them comes down to one small part of the molecule, where the names give it away: where methylcobalamin has a methyl group (just carbon and hydrogen), cyanocobalamin has a cyanide group. And obviously cyanide isn’t something you normally expect or want to find lurking in your multivitamin.

In fact, cyanocobalamin isn’t something nature ever intended your body to deal with – it exists only as a chemical synthesized in laboratories and doesn’t occur naturally in any living organism. Your body actually has no use for the cyano- compound itself, and will set about converting any cyanocobalamin you take into methylcobalamin as soon as possible, as the methyl- compound is what the human body needs to function properly.

This doesn’t only mean that cyanocobalamin is a less efficient way to supplement your vitamin B12 intake, but you also face the problem of what happens to the cyanide group that is liberated during its conversion into the ‘active’ (useful) form of B12, methylcobalamin. Cyanide is of course commonly used as a poison, so your body must remove this unwanted substance from your body. It should be noted that the amounts of cyanide released in the conversion process aren’t thought to be large enough to actually cause any damage, but it’s fair to say that most people would prefer not to take the risk of deliberately ingesting cyanide!

Methylcobalamin also has a few other explicit benefits over its cyanide-containing sibling. Tests have shown that it remains in the body for a longer period of time and at higher levels than cyanocobalamin, which means that your body is supplied with vitamin B12 for longer if you use methylcobalamin than if you use cyanocobalamin. The former may well also improve visual accommodation, but there is no evidence to suggest that the cyano- compound has the same effect. (Visual accommodation is often impaired by things like staring at a computer screen, and is affected by methylcobalamin because it is closely related to the nervous system).

However, perhaps the greatest benefit of methylcobalamin comes when you consider the problem of B12 deficiency. In the majority of cases, this isn’t actually caused by not getting enough of the vitamin from the diet, but being unable to absorb the vitamin properly (which can be caused by a variety of medical issues). Taking methylcobalamin sublingually (under the tongue) or with an injection allows the body to bypass the problematic absorption in the small intestine and use the vitamin immediately. This ensures that your body gets exactly what it needs, whereas if cyanocobalamin is used there can be further problems with converting the chemical into the active methyl- form. Heavy smokers especially may struggle to process cyanocobalamin because of heavy metals and toxins that build up in the liver.

So why do pharmaceutical companies use cyanocobalamin in the first place? Why does it ever appear in multivitamins, and why do so few people know about the better alternative? The answer is predictably disappointing: money. Synthesizing the unnatural cyano- form is far cheaper than making or obtaining methylcobalamin, and most of these businesses are more focused on increasing their profits than making sure you get the best possible supplementation.

Methylcobalamin is what your body actually wants and needs; cyanocobalamin is the substandard and unnatural substitute brought to you by the laboratories of big pharma which doesn’t perform as well and even releases a known toxin into your body. So next time you buy a multivitamin or a B12 supplement, check the ingredients and make sure you’re getting the superior methylcobalamin that your body can actually use.

Both our Liposomal B Complex and B12 With Folic Acid formulas are sourced with the much superior Methylcobalamin to enhance its absorption and efficacy – Not to mention eliminating cyanide from your body.

More Doctors And Researchers Speak Out About the Cholesterol Myth A recent conference entitled “Heart Disease in the 21st Century: Beyond the Lipid... continue reading 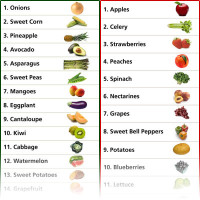 The Clean 15 and the Dirty Dozen!

When we go to shop for groceries, most of us know the importance of getting organic fruits and vegetables, but in these uncertain economic times, purchasing... continue reading